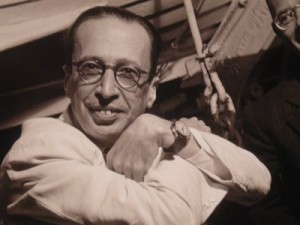 Manuel Bandeira, the Brazilian poet, was given a life-long private parking space in front of his apartment building in Rio de Janeiro by city officials.

The plaque above the space read POETA.

The best part of the story is that Bandeira not only didn’t own a car; he didn’t even know how to drive (I just love that!).

Today I think about how we honor our poets, what role they have in our lives, the lengths we’ll go to show them how much we care.  How would you honor your favorite poet?

Here is one of my favorite Bandeira poems (English translation follows original Portuguese):

MOMENT IN A CAFÉ

When the funeral procession passed by

The men who were in the café

In a perfunctory and absent-minded salute to the dead

For they themselves were all turned toward life

They were swallowed up in life.

They were relying upon life.

One of them, swept off his hat

In a long and slow arc of a gesture

And stared at the hearse:

That life is a treason

And he paid his respects to the flesh which passed by

Forever freed from the dead soul.